“Continuity theories” are based on the idea that language is so complex that one cannot imagine it simply appearing from nothing in its final form: it must have evolved from earlier pre-linguistic systems among our primate ancestors. “Discontinuity theories” are based on the opposite idea — that language is a unique trait so it cannot be compared to anything found among non-humans and must therefore have appeared fairly suddenly during the course of human evolution. Another contrast is between theories that see language mostly as an innate faculty that is largely genetically encoded, and those that see it as a system that is mainly cultural — that is, learned through social interaction.

Noam Chomsky is a prominent proponent of discontinuity theory. “The views of Noam Chomsky on the nature of UG (innate universal grammar) have long been dominant within the field of linguistics, but they themselves have undergone marked changes from decade to decade” (Christiansen, 59). He argues that a single chance mutation occurred in one individual on the order of 100,000 years ago, triggering the “instantaneous” emergence of the language faculty (a component of the mind-brain) in “perfect” or “near-perfect” form. The philosophical argument runs, briefly, as follows: firstly, from what is known about evolution, any biological change in a species arises by a random genetic change in a single individual which spreads throughout its breeding group. Secondly, from a computational perspective on the theory of language: the only change that was needed was the cognitive ability to construct and process recursive data structures in the mind (the property of “discrete infinity“, which appears to be unique to the human mind). This genetic change, which endowed the human mind with the property of discrete infinity, Chomsky argues, essentially amounts to a jump from being able to count up to N, where N is a fixed number, to being able to count indefinitely (i.e. if N can be constructed then so can N+1). It follows from these assertions that the evolution of the human language faculty is saltational since, as a matter of logical fact, there is no way to gradually transition from a mind capable only of counting up to a fixed number, to a mind capable of counting indefinitely. The picture then, by loose analogy, is that the formation of the language faculty in humans is akin to the formation of a crystal; discrete infinity was the seed crystal in a super-saturated primate brain, on the verge of blossoming into the human mind, by physical law, once a single small, but crucial, key stone was added by evolution.It thus follows from this theory that language did appear rather suddenly within the history of human evolution. 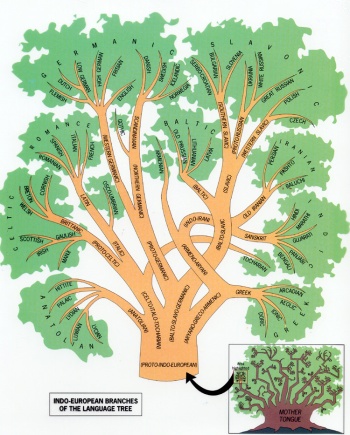